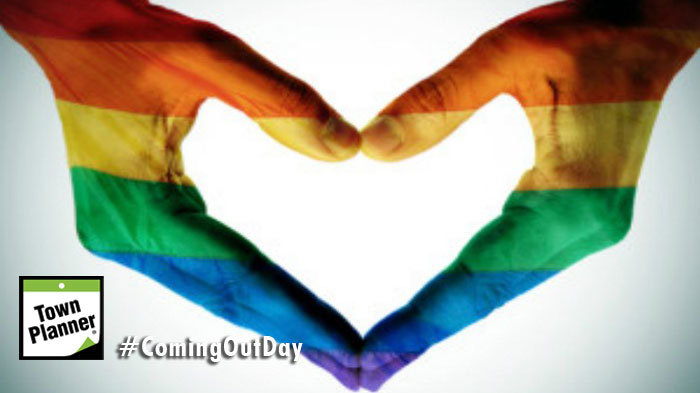 National Coming Out Day is celebrated annually on October 11 to remember the 1987 March on Washington for Gay and Lesbian Rights, founded just a few months later by a group of lesbian, gay, bisexual, and transgender (LGBT) leaders with the goal of promoting a world in which it is safe for LGBT people to be open and honest about their identities.

Coming out is associated with many different feelings, including confusion, fear, sadness, worry, relief, empowerment, and pride. Sometimes, especially for individuals who do not know any LGBT or LGBT-friendly people, there can also be a sense of being alone or “the only one.”

It’s important to know that all these feelings are normal and you are not alone, whether you are someone who is questioning your sexual orientation or gender identity or if someone you love has just come out to you and you’re not sure how to handle it. (More on resources below.)

Often after coming out to others, people feel good about being able to be genuine and honest with someone they care about and experience relief at not having to hide their identity anymore. In addition, coming out to others can lead to gaining support from the people one comes out to, gaining acceptance for who they are, and being able to share parts of their lives (e.g., information about a romantic partner) with others. Furthermore, coming out to others can be a way of educating others about LGBT concerns (including dispelling myths about sexual orientation and gender identity) and connecting with the LGBT community.

On the flip side, coming out to others does carry some risks. There is a risk that the person to whom you come out will not react the way you expected, leading to hurt feelings, rejection, and possibly even harassment or discrimination. As coming out relates to the workplace, it’s important to know also that in many states, it not illegal to fire someone on the basis of sexual orientation and/or gender identity. (See the “Employment Protections” map from the Human Rights Campaign to see what the employment protections are across the US.)

I think I might be gay or transgender. What’s the best way to come out to others?
There is no “best” way to come out to others. Coming out is a very personal decision that requires weighing the risks and benefits of doing so. The “best” way is really whatever feels best to you as the person coming out—it’s important that you do what is most comfortable for you in the timeline that is most comfortable for you. Talking to a psychotherapist or LGBT hotline (links to a few are below) can be a great first step in figuring this out.

Often it’s easiest to start with the person you think will be most supportive or accepting. This may be someone who is LGBT him- or herself or someone who has already said things indicating that he or she is supportive of LGBT concerns. It can be helpful to write down or practice what you want to say before you say it.

After coming out to others, remember that first reactions (especially negative ones) aren’t always permanent. Keep in mind that at the point you come out to someone, you’ve probably been thinking about your non-heterosexual or transgender identity for quite a while, and it was a process to be OK with it. The people you come out to will also go through a process of coming to terms with your sexual orientation or transgender identity.

Also, it’s best to remember that coming out is not a one-time event. Although it often does get easier with time, it is something that you will be doing over and over in your life as you meet new people or come into new contexts.

What should I do if someone comes out to me?
The most important thing to keep in mind if someone you care about comes out to you is that coming out is a leap of faith and trust in the relationship that person has with you. So start by acknowledging that faith and trust (e.g., by saying something like, “Thank you so much for trusting me with that information.”) and work on listening and accepting rather than reacting. Don’t be afraid to ask questions or to talk about your feelings; you may be having many of the feelings described above about coming out, and that is normal.

Do some reading on your own about how to be a support for those who come out. The Human Rights Campaign also has an excellent guide on this topic.

Regardless of your feelings in response to this person coming out to you, it can be very important and helpful for everyone if you get some support for yourself as well. Parents and Friends of Lesbians and Gays (PFLAG) is an organization with this specific purpose, and their support for loved one’s resources page is here. However, as you think about seeking out support, consider asking the person who came out to you whether or not you may discuss it with others. Try not to “out” the person by disclosing his/her sexual orientation or gender identity to others without his/her permission. (This is where one of the hotlines listed below can really come in handy since they are anonymous!)

If you are a parent or sibling (or other very close friend/relative), consider that you will now have a “coming out” process of your own as you share with others that you have an LGBT son/daughter/sibling, etc. This is when National Coming Out Day can be very relevant to your own life, as you can begin to advocate for LGBT issues and proudly call yourself an ally!